Adventures of Bee and Moe recently paid a visit to News Cafe Meyersdal, this was our first time visiting this branch as we always use to visit the one in Bedfordview as it was basically right around the corner from where we stay and the vibe was always fun and energising, there were always fun events happening and the food was great. Since it had been closed down we haven’t been to a News Cafe so after years of not visiting a News Cafe we were excited to see how the vibe has changed or if it had remained the same and if the food was as amazing as we remembered it to be. 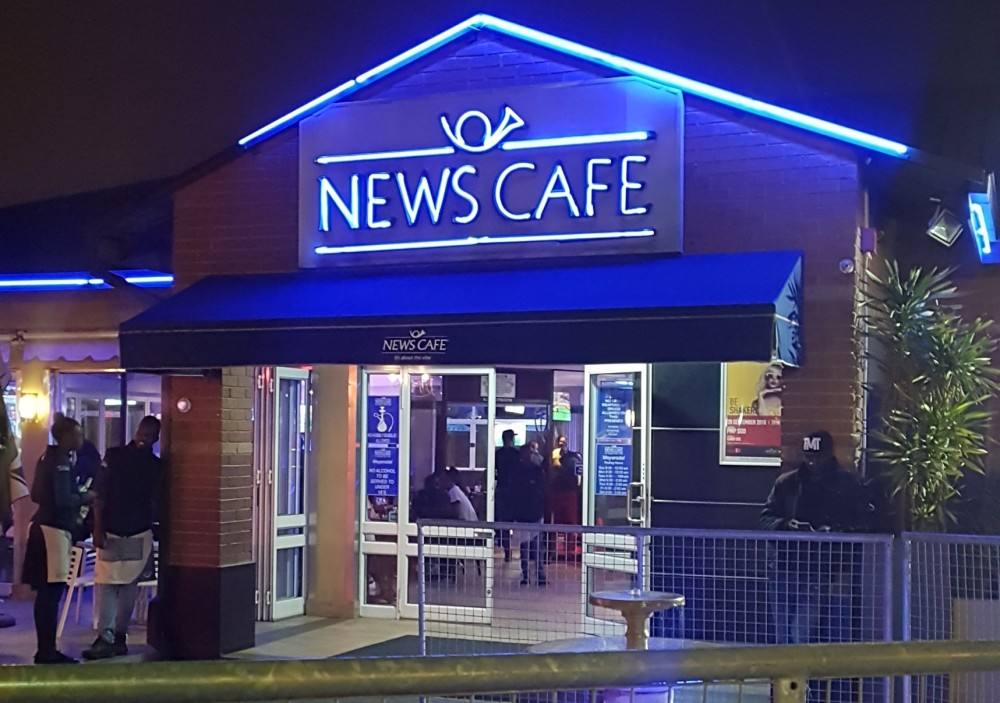 We were told to arrive at News Cafe around 6pm on Saturday as that’s when the place starts to get lively. We arrived a little after 6pm and it was very quiet, there was no live music and only a handful of customers but we stayed longer as we thought that it might still be too early so we hung around for almost the entire night we ordered supper, cocktails and later dessert.

As soon as we arrived we were seated outside as it was a beautiful warm evening and we could see everything from our cushion seats which weren’t very comfortable. Our waiter for the night was Martin who was friendly, efficient and always checked up on us with a smile on his face. We ordered a cocktail each as it’s been a while since we enjoyed a good cocktail and it was much needed. News Cafe offers a variety of very appealing cocktails but I opted for my favourite, Pina Colada while Moe tried the Corona-Rita which looked perfect for pictures and also Moe enjoys Corona, we were hoping to order one of the more colourful cocktails later that night but it seems that as we are getting older we have a lower alcohol tolerance and because the cocktails came in such huge glasses (which lasted us the night) they were enough to give us a good buzz. The cocktails were delicious and cooling for the warm night…we couldn’t really taste the alcohol in the cocktails but once we stood up we could definitely feel it. 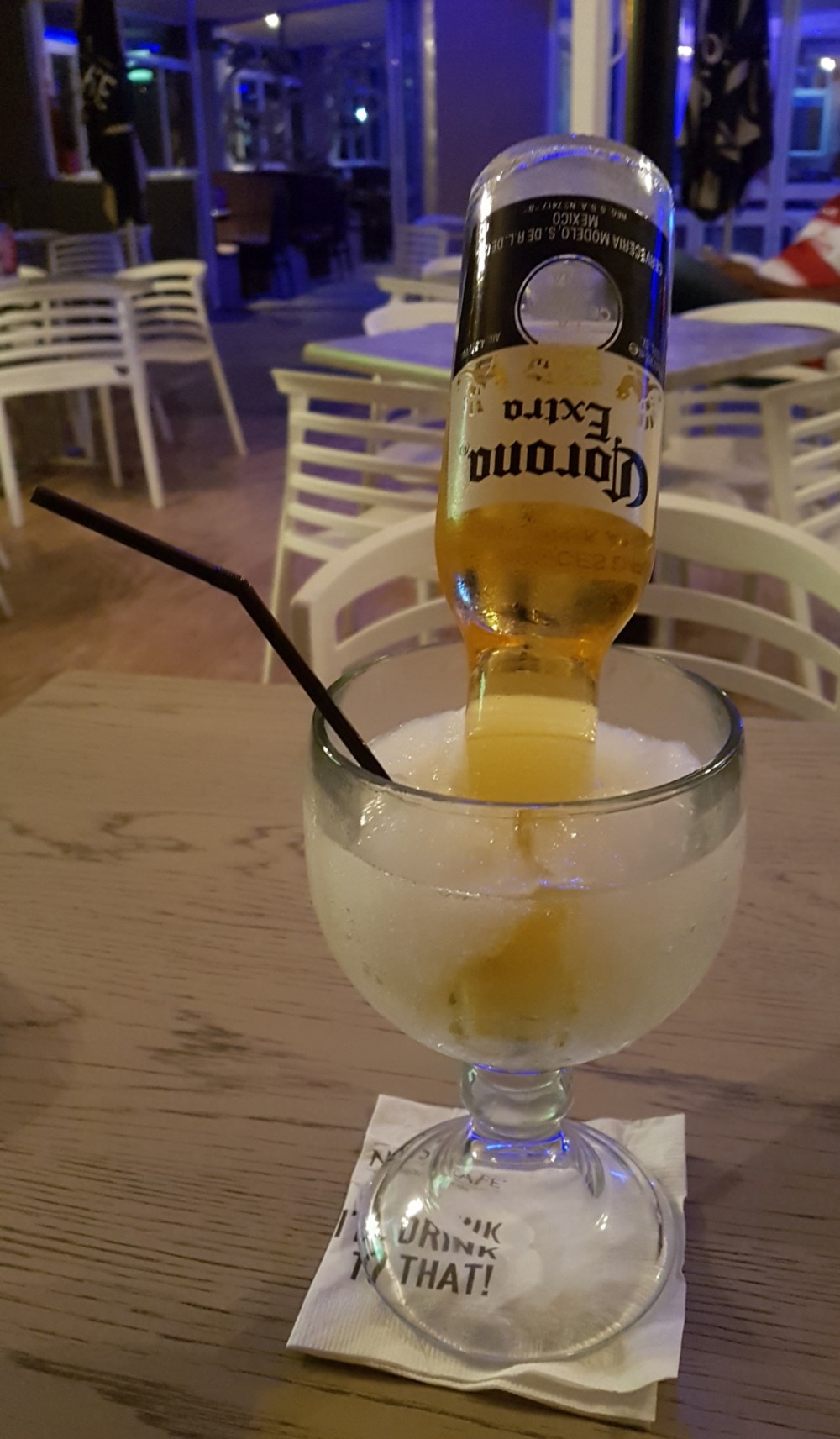 After a while we ordered supper, everything on the menu looked different compared to the last time we went to a News Cafe but nonetheless it all looked very appetising. I ordered a crumbed chicken and avo open sandwich which is basically crumbed chicken strips, with piquanté pepper, avo, baby leaf lettuce, tomato, grated cheddar cheese and honey and mustard mayo served on a choice of herb flatbread, sourdough, health or ciabatta, being half Italian I went with the ciabatta 😉. The open sandwich is also served with a choice of a side the options are: mac and cheese, onion rings, chips, stir-fried veg, greek side salad or slaw. So many options I was so tempted to go with the usual chips but decided to be different and go for the mac and cheese as this was something new, I have never seen mac and cheese as a side option before and I love a good mac and cheese. Moe was tempted to order the beef short ribs as it’s difficult to come across beef ribs on a menu at any restaurant as it’s always pork ribs and there’s never a beef option and none of us eat pork. The beef ribs was more of a side dish than a meal so he opted for the Jack’D Up burger which is Jack Daniel’s bbq basted smashed patty with cheddar cheese, caramelised red onions, gherkins and rockets..on the menu it also comes with bacon but Moe asked our waiter if they could replace the bacon with an egg instead which they were happy to do, he also had the same side options as me to go with his burger and went with the usual chips. 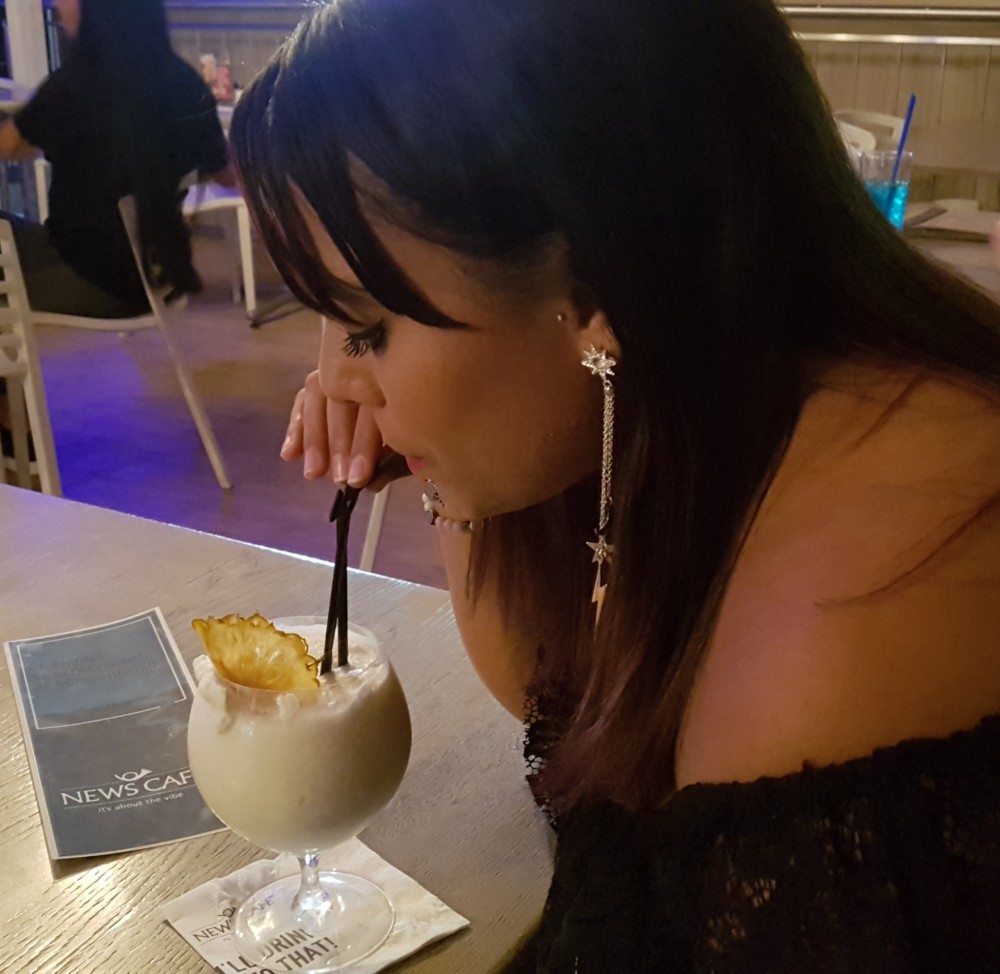 Our food took about 45mins or longer to arrive even though the restaurant wasn’t busy at all which would normally annoy us but because we weren’t very hungry and made friends with the couple next to us we patiently waited. By this time the restaurant wasn’t packed and there was still no DJ. The couple next to us received their food before us even though they arrived after, not long after that our food arrived and looked and smelled absolutely amazing. I just wanted to dig in forgetting to first take pictures to show all of you how good the food looks but Moe and I restrained ourselves and first took some pics, the lighting was bad but we did the best that we could. Soon after our food arrived so did the DJ who I was hoping would play some upbeat dance tunes but it was more mellow almost like a lullaby zZz. 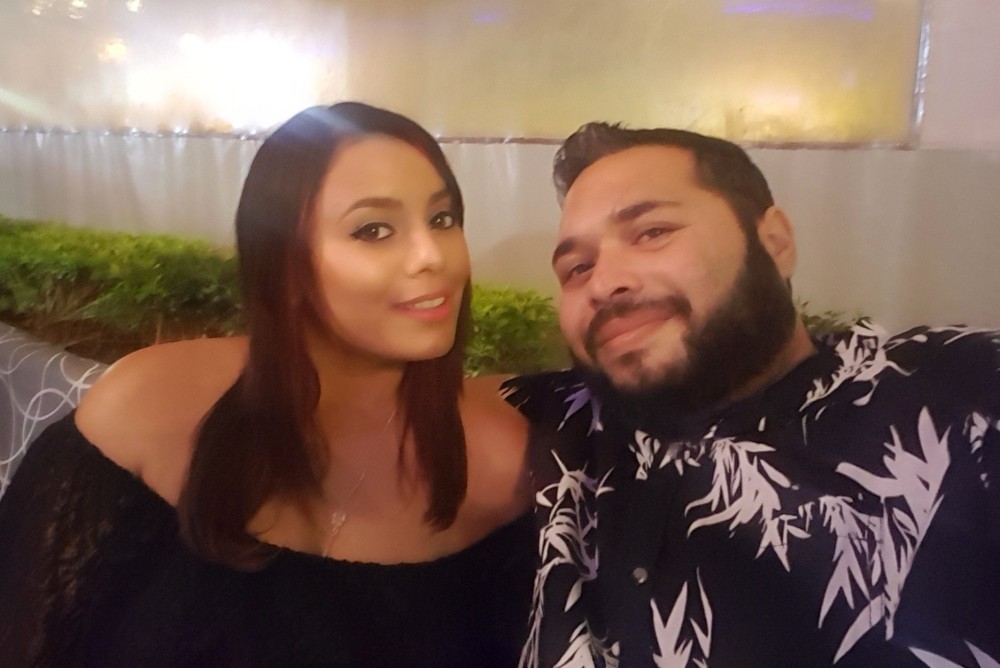 Anyways back to our food…my open sandwich was a bit messy to eat but absolutely divine the flavors worked so well together, the chicken was deliciously crispy while tender inside and there was an overload of cheese which I love. I loved the crispiness and tenderness of the chicken, the crunchiness of the baby leaf lettuce and ciabatta, the mild and saltiness of the cheddar cheese, the sweetness of the piquanté peppers and the tanginess of the mustard mayo…everything came together so well it was an explosion of flavour and texture in my mouth. My side, the mac and cheese which I was expecting to be small was a dish on its own and boy was it delicious. The mac and cheese was proper comfort food creamy and cheesy not dry at all, there’s just something about gooey melted cheese that gets me all excited and drooling.

Moe’s burger looked delectable, also messy but absolutely delicious. The bun wasn’t soggy, the patty was tender and juicy inside and the outside had the most divine slightly smoky, tangy and sweet Jack Daniel’s basting, the caramelised onions added to the sweetness of the burger, the gherkins added some tanginess and crunchiness, the rockets added a bit of peppery bitterness, the cheddar cheese added a mild saltiness and the over medium fried egg added some texture to the burger. Each element worked so well together and tasted amazing. Moe’s side, the chips weren’t mushy and not hard they were perfectly fried and yummy. Just thinking about the scrumptious dishes we had is making my tummy rumble. The serving sizes of each dish was huge that we both couldn’t finish our food and took half of it home and enjoyed it again for breakfast the next day 😊. After our meals we sat there sipping on our cocktails catching up on our week and looking at the people around us waiting for the music to get better and the venue to fill up which didn’t happen. We decided to order dessert, the only desserts they had was cake so we opted for a slice of carrot cake to share. We were expecting a slice of cake but instead got the cutest miniature cake. The first bite of cake had us closing our eyes, you know that feeling when something tastes sooo good you automatically close your eyes and savour every bite? That’s how amazing the cake tasted! The cream cheese icing was velvety smooth on our tongues and the cake was moist and fluffy, we were so stuffed from our meals but couldn’t stop taking another bite and another bite of the cake till it was all gone and left us feeling so satisfied. The carrot cake was honestly the best I’ve ever tasted, it was so heavenly you have to try it for yourself. Now I truly understand the meaning of #foodporn and #foodgasm.

Despite the News Cafe not being lively it was a fun night out, News Cafe Meyersdal was neat and the service was great not forgetting the scrumptious food and delicious cocktails. We highly recommend visiting News Cafe for a nice chilled vibe and you definitely won’t regret the food and drinks.